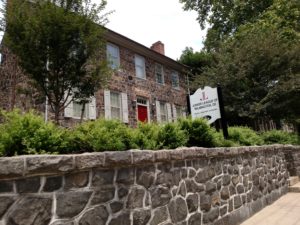 In the early 1770s, miller John Marshall used stone taken from the bed of the north face of the Brandywine River to build the Lea-Derickson house. The simple facade is typical of the Quaker-Georgian architecture of Brandywine Village. James Marshall had financial difficulties and sold the house to Samuel Morton, another merchant miller, who in turn sold it to Thomas Lea around 1785. In the mid-1830s a well-to-do miller, Jacob Derickson, bought the house as a wedding gift for his daughter, Martha, and her husband, Amor Hollingsworth Harvey. The property remained in the Derickson family until its sale to Old Brandywine Village Inc. in 1963. During those 130 years, there were several additions to the house that doubled its original size.

In 1962, this house and others on the 1800 block of North Market Street were to be razed to allow for construction of a motel. A group of citizens, including Mrs. Charles Reese, a Junior League past-president, formed Old Brandywine Village, a nonprofit organization whose purpose was to restore the historic homes in this area and ensure their future. 1801 Market Street was purchased by Old Brandywine Village in 1963 and restored under the direction of architect Robert Raley. Some of the artifacts discovered on the property by the Archaeological Society of Delaware are displayed in the house’s living room. The exterior woodwork is painted Shipley House Grey, the color used extensively in the historic Wilmington home of Thomas Shipley, which was built between 1759 and 1788. That house was demolished in 1957, and its interiors were installed at Winterthur.

The League leased the Lea-Derickson house from Old Brandywine Village, in 1965 and established its headquarters in this historic building. In 2006, a capital campaign was initiated by the Junior League of Wilmington to raise funds for much-needed renovations. 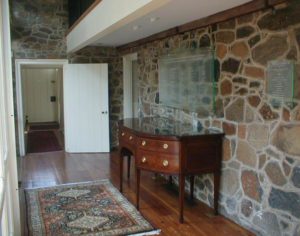 For more than 40 years, the historic Lea-Derickson House has served as the League’s base of operations for community service, training, recruitment, and administration. Our headquarters on North Market Street anchors the Brandywine Village community, an urban neighborhood undergoing dramatic renewal.

As part of a strategic planning process, the League reaffirmed its commitment to retain its headquarters in Brandywine Village. A comprehensive facilities assessment was performed by JAED Associates, delineating the property’s primary needs and associated costs. An independent feasibility study undertaken in Spring 2006 explored two alternatives – the first being significant renovations of the existing property, and the second option consisting of renovations accompanied by construction of a new expanded space. The feasibility study indicated significant support within the League and the wider philanthropic community for the renovation alternative without increased capacity.

Based on these studies and the planning process within the League, the Cornerstone Campaign was established with a goal of $750,000: $575,000 for building renovations, $25,000 for an extensive archives project, and $150,000 for a maintenance endowment.

In June 2006, the League pledged $25,000 from assets to launch the campaign. External solicitation to local foundations, members, and the community at-large began in September. By the end of 2007, more than $750,000 in pledges and contributions had been collected. In the end, the Cornerstone Campaign had a collection rate of 100 percent, surpassed its goal and finished on budget.

We are an organization of women committed to promoting voluntarism, developing the potential of women and improving communities through the effective action and leadership of trained volunteers. Our purpose is exclusively educational and charitable.