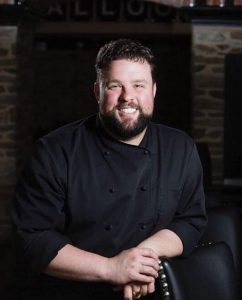 Cooking is in Chef Robbie Jester’s blood – he began his career in his family’s restaurant at the age of 12. After finishing high school, he continued on to the Culinary Institute of America where he graduated with high honors. Upon returning to Delaware Chef Robbie made his way through several prominent local kitchens and arrived at Toscana Kitchen and Bar. During his tenure with Toscana he oversaw catering and restaurant operation, cooked for the King and Queen of Sweden,and catered then Vice President Biden’s daughter’s wedding.

When High 5 Hospitality purchased the space in August of 2014, Chef Jester moved on to become a part of High 5 Hospitality and open Stone Balloon Ale House by preparing favorites from his childhood and “comfort food playfully re-imagined”.  Then in 2018 he opened Limestone BBQ and Bourbon and in 2019 Eggspectation.

Jester’s talents have not gone unnoticed. Chef Jester has been featured in Delaware Today Magazine, Brandywine Signature Magazine, Out and About, and the News Journal as well as being voted Best Chef Upstate Delaware 2017, 2018, and 2019. Robbie was voted one of the 40 top leaders under 40 by the Delaware Business Times and Rising Sar by the Delaware Restaurant Association. Chef Robbie was featured on Food Network show Guy’s Grocery Games in November 2015 and was invited back for Redemption in 2016.  Chef Robbie also Beat Bobby Flay.